Showing posts from September, 2015
Show all

Shelf Awareness on THE KILLING KIND

- September 29, 2015
Many thanks to Elyse Dinh-McCrillis (aka Pop Culture Nerd ) for her lovely review of THE KILLING KIND in today's Shelf Awareness . Here's a taste (as ever, click through to read the rest): "Hendricks is very good at his job... Holm (The Collector Trilogy) is good at his job, too. His prose is lean, his pacing brisk, the suspense high and his plot unpredictable... There's plenty of violence and dark humor, but heart as well, with Hendricks holding a candle for a love he can't forget. He's not just the killing kind; he's also the romantic kind."
Read more

My Four Minutes and Forty Seconds of Fame

- September 28, 2015
Last week, I sat down with Caroline Cornish to talk about THE KILLING KIND . The interview aired during Friday's episode of 207. If you'd like to check it out, it's up in its entirety on their website. By my count, I only have eleven minutes and twenty seconds of fame left; I'd better use them wisely.
Read more

The AP Reviews THE KILLING KIND

- September 22, 2015
I'm absolutely floored to discover The Associated Press just reviewed THE KILLING KIND . Here's a taste: "The violence in THE KILLING KIND is visceral, the writing is tight and tense, and the characterizations are more in-depth than usual for this genre. This is a fun spin on crime fiction by having a hero who may also be the villain. The unpredictability of the story will also have readers wondering what's going to happen next, if this is indeed the first in a series."
Read more

- September 17, 2015
There are often moments in my writing career that make me shake my head with disbelief and smile. Getting a rave review from NPR is one such moment.  And to make that moment even sweeter, said review comes courtesy of Jason Heller . I've been a fan of Jason's writing since the early days of the AV Club , and I've bought loads of books and music on the strength of his reviews. Here's a taste of what he had to say about THE KILLING KIND : "What makes the book sing is not some shotgun marriage of genres—this is a thriller, plain and simple—but its lean action, breakneck execution, and a nervy concept that's almost too perfect: Protagonist Michael Hendricks is a hit man who only hits other hit men... THE KILLING KIND is a brutal book about brutal people in a brutal world... For all its violence and darkness, though, the book has plenty of sly humor, sharp dialogue, and even the occasional yanked heartstring... relentless and breathtaking." And as an added bo
Read more

THE KILLING KIND is Now Available!

- September 15, 2015
As of today, THE KILLING KIND is officially out in the US, wherever books are sold. I've waited a long time to type those words. Now that the day is finally here, I couldn't be happier. It's only mid-morning as of this writing, but my release day's already been pretty nuts. THE KILLING KIND was, briefly, a trending topic on Twitter. Reviews, interviews, and well-wishes are coming fast and furious. I'm sure I'll fail to thank someone along the way, but not for lack of trying. Here's a (doubtless partial) roundup of release-day coverage: Dan Malmon wrote a fantastic review for Crimespree Magazine, in which he said: "Whether it’s cringing at the depths of Engelmann’s depravity, or picking up the most subtle of character beats of the vast supporting cast that make up THE KILLING KIND, the reader can’t help but be fully invested in what befalls the players in this thriller. Holm has put fully formed people on the page… and then proceeds to do horrib
Read more

THE KILLING KIND in the Maine Sunday Telegram 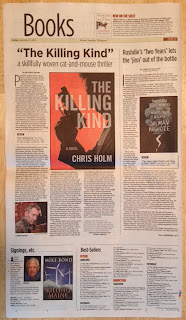 Today, I woke up to a text from my mother that read, "Put a Sunday paper on your front stoop." I was pretty sure it was a declaration, not an instruction, so I looked outside... and found out that not only did THE KILLING KIND get a rave in today's Maine Sunday Telegram, said rave took up three-quarters of their Books page! Here's a link to the digital version , so you don't ruin your eyeballs trying to read that photo. Many thanks to Mike Berry, who wrote the review, and my mom, who enthusiastically delivered it by dark of night.
Read more

- September 04, 2015
Yesterday, I received a copy of the final US version of THE KILLING KIND . It's my first hardcover release, and it's as gorgeous as I've come to expect from Mulholland Books —sleek, modern, and eye-catching. There is, however, something missing. Namely, my acknowledgments. These things happen. Putting together a book is a complex process. Now and again, something's bound to fall through the cracks. And I'm assured my acknowledgments will appear in later editions. But in the meantime, I thought I'd share them here. THE KILLING KIND traveled a long and winding road to publication, and many have helped it on its way. It'd be a shame if their efforts were to go unrecognized. So, without further ado... ACKNOWLEDGMENTS A few years ago, Steve Weddle, editor of Needle: A Magazine of Noir, asked if I’d be interested in contributing a short story. I pitched him a couple ideas, and he pushed me to write the more ambitious of the two. The resulting story, “The
Read more
More posts