The first short story I ever wrote was a creepy little horror tale called "The Toll Collectors," way back in '05. It took a long and circuitous route to publication, thanks to a sleazy editor who accepted it and then vanished from the internet without a trace, leaving me unsure as to my rights. But eventually, in '09, it saw the light of day, appearing in a then-new webzine called Beat to a Pulp.

I didn't realize it at the time, but that credit would lead to a great friendship and rewarding creative collaboration with Beat to a Pulp's crack editor, David Cranmer. David's one of the nicest guys you'll ever meet, and his keen eye for talent has developed Beat to a Pulp into a force to be reckoned with. He's also helped to launch no shortage of careers, including mine.

Today marks my sixth story to be published by Beat to a Pulp. "The Follow-Through" is a nasty little slug of Maine noir. It wrote fast, and surprised me just a little come the end. With luck, it'll read the same.

And David, as ever, it's a pleasure to stop by. If you'll keep running 'em, I'll keep writing 'em.

Every writer who puts fingers to keyboard or pen to paper fantasizes about what their life will be like when their novel's out there in the world. Heck, plenty of folks who can't lay claim to being a writer daydream about it, too. I should know; I've been both. As I've mentioned here before, I'm not one of those people who realized in second grade they were destined to be a writer. I came to it a little later, when my Big, Important Plans for life fell short of my expectations.

It's been sixteen months since my first novel was released. Nine months since my second. One month until the release of my third. Enough time, enough work, and enough words between me and HOLY CAPSLOCK I'M A REAL LIVE AUTHOR for the first flush of pie-eyed writerly romance to fade, and my life to settle into some semblance of a new normal.

Honestly, vast stretches of my life aren't all that different. I still have a day job. It still pays most of the bills. I park the same car at the same house as I did before my books were published. Said house is a little messier than it used to be, because my writing output's increased considerably these past sixteen months. Some of that was by necessity; I had a tight deadline for book three, and I was determined to deliver it on time. But mostly, I attribute the increased output to the fact that I feel like I've been given my shot, and I'm determined not to waste it.

I will say I worry a damn sight more. Once your stuff is out there for all to read, it's put-up-or-shut-up time. So I spend my days thinking, am I promoting myself enough? Am I driving people crazy with promotion? Are my books selling? Are people liking them? Will I ever land another book deal? Should I have deleted that iffy comma in chapter seventeen? That political tweet I wrote last week?

And then there are those short bursts of utter insanity that underscore just how much has changed. A conversation in a limo with a literary idol. Knocking back drinks with a table full of old friends you just met. Reading to a packed house. Reading to an empty room. Fan mail from total strangers. Hate mail from total strangers. Signing books, which at first feels completely weird and wrong and oh by the way there's no do-overs if you fuck up the inscription. Getting your first bad review, and feeling like someone ripped your heart out of your chest. Getting your tenth, and finding it hilarious. Freaking someone out just by tweeting at them. Realizing that writer whose books you hate is the nicest person on the planet. Realizing that writer whose books you love is kind of a jackass. Realizing people feel the same in both directions about you.

Reading those last two paragraphs, you may be thinking, Christ, listen to the published author whine. Such is your right; one thing I've learned these past sixteen months is that by putting myself out there I invite folks to form opinions about me, well-reasoned or otherwise. But here's the thing: I'm loving every second of this. The highs are far beyond anything I ever dared hope for in my life. And the lows are the sorts of lows real, live published authors feel. Sure they suck. But in a way, they're better than the vast beige middle of doing nothing.

It's a hoary old saw that college is the best time of your life, but there's a kernel of truth in that statement. Thing is, it's no more than half-right at best. For many people, college is the wildest, most challenging, most emotional time of their lives, before they settle into the long, hard slog of adulthood. It's the best and worst life has to offer all rolled into one deliciously melodramatic package.

That's what the writing life is like. Thrilling. Gutwrenching. Wonderful. Horrible.

But damn, if it ain't living.

The fellas at The Founding Fields have been champions of my Collector series from the get-go, for which I'm quite grateful. Many of their staff reviewers have taken a crack at reviewing my prior books, and I have reason to believe they'll do so again for THE BIG REAP.

The first such review comes courtesy of Bane of Kings, who I'm delighted to report gave THE BIG REAP a perfect 5/5! You can read his review here. I can't tell you how happy I am folks who've stuck with me from the get-go are digging this book, because believe you me, I didn't exactly play it safe.

THE BIG REAP at Every Read Thing

Brandon at Every Read Thing went live with his review of THE BIG REAP today, and he declares it "...a real blast to read... Holm's finest work yet." Thanks, Brandon! Far be it from me to quibble.

In which I am discovered...

There's a fantastic blog post up at Insatiable Booksluts today about how readers discover authors, and I'm delighted to report that I'm one of the authors discussed. In part because it's simply nice to be discovered, and in part because I sometimes worry my aversion to the hard sell means I'll get drowned out by the carnival barkers who dominate so much of social media. It's cool to realize I can hang out and shoot the shit with cool folks about stuff we like, and wind up selling some books along the way.

The fact I get mentioned in the same breath as NFL-kicker/gay-rights-advocate/winner-of-the-internet Chris Kluwe is just the icing on the cake.

Raging Biblioholism on THE BIG REAP

This morning, I woke to a brand spankin' review of THE BIG REAP, courtesy of Andrew at Raging Biblioholism. He, um, loved it:

"This is the sort of adventure story you always look for but never seem to find anymore: full of hair-breadth escapes, devious villains, surprising assistance, and splendidly twisted plotting. [Holm] pulls off the rare hat trick of being smart, funny, and unassuming – and goddamn it feels good to read something so confident. Rating: 5 out of 5."

Thanks, Andrew, for the kind review!

The question of the week at Criminal Minds is, "Whose work can you not read while writing your own?" My answer's up today.

In which the author finally exhales...

If you're reading this, chances are you know the third book in my Collector series, THE BIG REAP, comes out soon. July 30, to be precise. It's the longest in the series by a damn sight, and the most ambitious as well. Of course, ambitious ain't the same as good, so when advance copies were made available this week, I started sweating its reception something fierce.

Its first review went live today over at Snobbery, and I'm delighted to say it's the kind of review authors would gladly give a pinkie for. Here's a taste (click through to read the rest):

"You know those books that you want to tell everyone to read, but when asked to describe what they’re about, you kind of draw a blank because even tiny details venture into spoiler territory? Chris F. Holm’s third book in The Collector series, THE BIG REAP, is one of those books."

Thanks, SJ, for the kind words. You made my day.

First the argument, then the booze...

My last post, if you cast an eye toward the comment section, proved quite the pot-stirrer (in a good way, I think), so it's only fitting this one is as frivolous and hedonistic as can be. Today, I'm partaking in oenophile/author/foodie blogger Richard Auffrey's Authors, Alcohol, and Accolades feature, in which Wesley Chu, Zachary Jernigan, and I discuss our favorite libations. Stalkers take note, if you ever feel like delighting me with a bottle at a signing.

Only One Rule That I Know Of 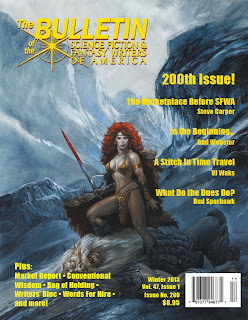 Recently, the science fiction and fantasy community has been embroiled in a heated debate over the treatment of women both on and off the page. It was triggered, in part, by the cover pictured above, which appeared on the official Bulletin of the Science Fiction and Fantasy Writers of America. Many members of the SFWA objected to the image on the grounds that its regressive depiction of an outmoded female archetype does both our genres and our organization a great disservice.

I'm one of them. And if you read my contribution to this week's SF Signal Mind Meld, you'll know why.

I don't want to spill a lot of ink on this issue or the tumult it has caused within the community, because at root, there's nothing to debate. Not that that's stopped either side from lobbing their respective intellectual clunkers at one another. To wit:


It seems to me the only position out there worth a damn is to try your best to treat people equitably off the page, and to create fully-fleshed characters on it. Or to distill the point down further, I defer to the inimitable Kurt Vonnegut, who seems to've already said anything I've ever tried to say worth saying, only better:


Hello, babies. Welcome to Earth. It's hot in the summer and cold in the winter. It's round and wet and crowded. At the outside, babies, you've got about a hundred years here. There's only one rule that I know of, babies -- God damn it, you've got to be kind.

Hmm. It would seem this is my 500th blog post. Kinda wish I'd hung some streamers or something. Alas, it's naught but a quick link update. Maybe 501 will be chock full of big haps.

Today's my day to post at Criminal Minds; I'm talking about the realities of writing while holding down a day job.

And Brandon Sears at Every Read Thing takes a look at my first short collection, 8 POUNDS. Thanks for giving it a read, Brandon!

Now if you'll excuse me, I've got to blow out these candles and dish up some 500th-post cake. Then it's into the rented Moon Bounce for me.