"If you like thrillers that really thrill, and with a bit of a Michael Crichton vibe, you're going to enjoy this to the max."
-Stephen King 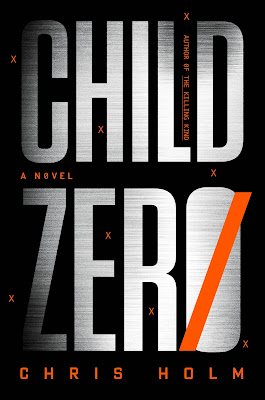 A fact-based thriller in the vein of Michael Crichton about our species' next great existential threat—available May 10, 2022, from Mulholland Books.
Order now:
Amazon / Apple Books / Barnes & Noble / Google Play / Indiebound
It began four years ago with a worldwide uptick of bacterial infections: meningitis in Frankfurt, cholera in Johannesburg, tuberculosis in New Delhi. Although the outbreaks spread aggressively and proved impervious to our drugs of last resort, public health officials initially dismissed them as unrelated.
They were wrong. Antibiotic resistance soon roiled across the globe. Diseases long thought beaten came surging back. The death toll skyrocketed. Then New York City was ravaged by the most heinous act of bioterror the world had ever seen, perpetrated by a new brand of extremist bent on pushing humanity to extinction.
Detective Jacob Gibson, who lost his wife in the 8/17 attack, is home caring for his sick daughter when his partner, Amy, summons him to a sprawling shantytown in Central Park, the apparent site of a mass murder. Jake is startled to discover that, despite a life of abject squalor, the victims died in perfect health—and his only hope of finding answers is a twelve-year-old boy on the run from some very dangerous men.
Praise for CHILD ZERO
"CHILD ZERO moves like no other novel I’ve read lately, with Holm’s gripping writing delivering a story whose thrills come as much from its plausibility as from its twists and surprises. A deeply moral cautionary tale, set in a credible future we should be afraid to let happen."
-Matt Bell, author of the New York Times Notable Book APPLESEED
"CHILD ZERO gave me nightmares—in the best possible way. Holm offers a terrifying and convincing glimpse into the future that may well await us, while at the same time telling a deeply compelling story full of heart and, despite all the odds, hope. I couldn’t put this one down."
-Lou Berney, Edgar Award-winning author of THE LONG AND FARAWAY GONE
"A lean and fresh narrative that feels too terrifyingly real... CHILD ZERO is a book you can’t bring yourself to put down... Holm’s stunning creativity dazzles and mesmerizes... CHILD ZERO needs to be in your pre-order list the moment you finish reading this sentence."
-Best Thriller Books
"CHILD ZERO represents an evolution in Chris Holm’s journey as an author... Readers will be reminded of books like COMA and THE ANDROMEDA STRAIN... extremely evident [is] Holm’s ability to infuse heart and empathy into plots that on the surface read like breakneck thrillers filled with non-stop action."
-BOLO Books
"Intense, propulsive, provocative—and shot through with the kind of been-there, done-that authenticity and expertise that makes it really scary... highly recommended."
-Lee Child, CBE, internationally bestselling author of the Jack Reacher novels
"The book’s pacing... is near relentless while the Holm’s handling of scientific minutiae remains skillfully subtle... The result is a socially conscious thriller that speaks to one’s brawn and brains, written by an author who has dared to step outside his comfort zone to outstanding, and painfully resonant, effect. Feel free to remind yourself: This is a work of fiction—at least for now."
-Criminal Element
"When this book hits shelves in May, you need to race to your local bookstore and grab a copy... CHILD ZERO reads like the literary equivalent of a standalone big budget summer blockbuster... CHILD ZERO is not only a thrilling novel, but an urgent warning about our future and the dire consequences we all face if nothing is done to alter the course."
-Every Read Thing
"Terrific... a terrifying, all-too-plausible thriller in the Michael Crichton tradition... a white-knuckle tear through the streets of a New York laid waste by pandemics of the future. I lost a lot of sleep over this book, even after I finished reading it."
-Joseph Finder, New York Times bestselling author of JUDGMENT
"A chilling vision of the future that would make Michael Crichton proud. Like the best speculative fiction, Holm doesn’t offer an easy out. An airtight, propulsive thriller, CHILD ZERO just keeps turning the screws past the breaking point. Exactly my kind of book!"
-Matthew FitzSimmons, bestselling author of CONSTANCE and the Gibson Vaughn books
"CHILD ZERO is a thriller that truly thrills! With warp-speed pacing and frightening medical details, it offers a terrifying look at a world gone mad and the possible plagues to come."
-Tess Gerritsen, New York Times bestselling author of LISTEN TO ME
"You know that feeling when you read a book that's smart and relevant and brilliantly thought-out and plotted, and when you close it your first reaction is: 'Now that's how it's done!' That's how I feel having just finished CHILD ZERO."
-Rob Hart, author of THE PARADOX HOTEL
"This novel is absolutely brilliant. Holm uses his own background in molecular biology to pen a thriller like no other. This book should serve as a wake-up call for all of us."
-Jenn's Bookshelves
"CHILD ZERO, by Chris Holm: If you like thrillers that really thrill, and with a bit of a Michael Crichton vibe, you're going to enjoy this to the max. In the last 70 pages the twists go off like a string of firecrackers. May 10. Mark your calendar."
-Stephen King, internationally bestselling author of IT, THE SHINING, and THE STAND
"Could a future pandemic be exponentially worse than COVID-19? Holm answers yes in this alarmingly plausible thriller. Holm perfectly balances plot, characterizations, and science. Fans of Lawrence Wright’s THE END OF OCTOBER won’t want to miss this one."
-Publishers Weekly (starred review)
"CHILD ZERO is a tour de force, beautifully written and hauntingly relevant. Holm has given us a powerful and chilling near-future thriller with a breakneck pace in the best tradition of Michael Crichton's novels and Max Brooks' WORLD WAR Z."
-Matthew Quirk, New York Times bestselling author of HOUR OF THE ASSASSIN