Hey, remember a while back when I mentioned I'd written a short called Green for the good folks (er, yard-hardened badasses) at Crime Factory? (If not, just smile and nod; it's not like I'll know the difference.) Anyways, in that post, I mentioned Green would be appearing in issue #4 of Crime Factory. Thing is, issue #4 hit the virtual stands a couple weeks back, and Green wasn't in it.

So what happened? Was it a case of crossed wires? An editorial slip-up? Or was it something more sinister, like maybe me and Rawson tossed back a couple and then had ourselves a knock-down, drag-out brawl over which Macdonald is the awesomest? (Ross beats John D. hands-down, and I'll fight any man among you who says otherwise. Unless than man is Matthew McBride. I mean seriously, have you seen that dude? I'd concede Dan Brown beats Ross Macdonald before I'd go toe-to-toe with him.)

Turns out, the answer is no to all three. In fact, the reason for my omission is pretty damn great. And today, I got the thumbs-up to tell y'all what it is.

See, Green is going to appear in Crime Factory's upcoming print anthology, Crime Factory: The First Shift, and I for-seriously couldn't be happier. Liam, Keith, Cameron and company've got a good thing going with their online magazine (if you haven't had the pleasure, check their archives here), cranking out issue after issue of kick-ass fiction, news, and reviews from the wrong side of the tracks. And now they've set their sights on sullying up the print world, too.

Who wouldn't want to be a part of that? (Not this guy. This guy's psyched. You know, unless Rawson starts talking shit about Ross Macdonald.) 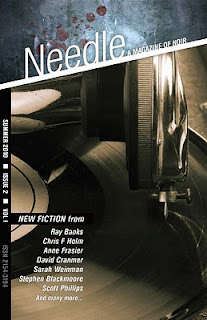 The summer issue of Needle, featuring my novella The Hitter, is now available! Oh, and it also contains new fiction by such kick-ass writers as Stephen Blackmoore, Frank Bill, David Cranmer, Ray Banks, and Julie Summerell, just to name a few.

So what're you waiting for? Go get yourself a copy or three! (No, for real; orders over $19.95 are eligible for free shipping...)

Sneak Preview of "The Hitter"!

Want a taste of what the summer issue of Needle Magazine's got in store? Then pop over to their blog for a sneak preview of my novella, The Hitter!

BEAT TO A PULP: ROUND ONE Cover! 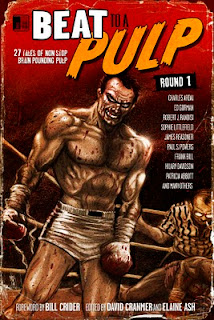 Last night, David Cranmer dropped a bombshell: the cover for the upcoming Beat to a Pulp print anthology, BEAT TO A PULP: ROUND ONE. Painted by James O'Barr, creator of THE CROW, with additional design by John Bergin, it's at once brutal, witty, and nostalgic, like some gorgeous artifact from a violent, bygone era.

I, for one, am nuts about it. It reminds me of the timeworn pulps I used to buy in bag sales at the North Syracuse Free Library (two bucks a bag, and as many books as it'll carry). It taps into that lurid, visceral appeal that draws folks like me to pulp in the first place. In short, I couldn't have asked for a better cover for the first book I'll ever be a part of.

ROUND ONE is set to drop in a month or two. I suspect when it does I might just mention it. Buy it for Ardai, Littlefield, Davidson, Abbott, Reasoner, and Randisi. But when you do, take a gander at my humble entry, a creepy little adventure-pulp/horror crossover called A Native Problem. If I'm half as good at my job as the guys who made this cover are at theirs, it'll scare you silly for sure.