It's been a dizzying two weeks, give or take, since CHILD ZERO was released into the wild. Here's a brief update on where I've been, and where I'll be in the near future. Where I've Been: The downright dazzling Steve Weddle was kind enough to interview me for Do Some Damage I swung by CrimeReads to offer up a list of Eight Biological Horror Movies Guaranteed to Make Your Skin Crawl Speaking of CrimeReads, ace editor Lisa Levy snuck CHILD ZERO onto her list of May's Best Psychological Thrillers Do Some Damage also published a guest post by yours truly about the impending threat of a post-antibiotic era My virtual Murder by the Book event with good friend Matthew Quirk is up on YouTube for your viewing pleasure As is my Rogue Reads panel with Tracy Clark, Sara Paretsky, Amanda Quick, and James Rollins John Valeri penned this very kind review of CHILD ZERO for Criminal Element My pal Nick Petrie and I stayed up late for our virtual Mysterious Galaxy event ,
Read more

- May 10, 2022
I've waited six long years, from inception to publication date, to say this: CHILD ZERO is now available wherever books are sold! I'll be celebrating tonight at Hunt + Alpine . You're welcome to join me, if you're so inclined. In other news: Marshal Zeringue was kind enough to interview me for his blog He also subjected CHILD ZERO to the Page 69 Test Novel Suspects included CHILD ZERO on this list of anticipated crime novels Jenn's Bookshelves offered up this glowing review Rogue Women Writers had me by for a guest post As did Jungle Red Writers, who let me blather on about JURASSIC PARK Many thanks to all, as well as anyone who's purchased a copy of CHILD ZERO , or supported my work along the way!
Read more 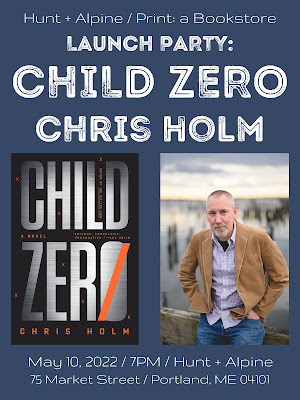 It's hard to believe the publication date of CHILD ZERO is only a week away—particularly since I've been working on this book since late 2016. As you might imagine, my promotional cycle is in full swing, so I thought a quick roundup was in order. Hit the deck, 'cause here come the bullets: Amazon's editors named CHILD ZERO one of May's best science fiction novels Canadian publication Everything Zoomer did 'em one better, calling it  one of May's ten best works of fiction If you want a sneak peek at CHILD ZERO before you buy,  Novel Suspects has you covered They also posted my proposed canon of biological thrillers , a subgenre whose roots extend far deeper than you might imagine If you're light on cash, pop over to Goodreads by 5/6 for a chance to win one of twenty-five CHILD ZERO hardcovers The latest issue of  The Big Thrill features an interview with yours truly I've also got a ton of events lined up, both virtual and in-person, which you can
Read more

- April 28, 2022
The release date for  CHILD ZERO  is nearly upon us, and I've got a veritable boatload of events lined up to celebrate—including an HONEST-TO-GOD, NO-FOOLING, IN-PERSON RELEASE PARTY hosted by one of Maine's most venerated drinking establishments! CHILD ZERO Release Party Tuesday, May 10, 2022 7PM Eastern Hunt + Alpine 75 Market Street Portland, ME Mark your calendar and call your babysitter, because I've joined forces with the fine folks of Print: A Bookstore and Hunt + Alpine  (one of Thrillist's Best Cocktail Bars in America ) to launch CHILD ZERO in style! This event—which is free and open to the public—will feature door prizes, custom cocktails, and piles of brand spankin' hardcovers just waiting to be personalized! As an added bonus, if you buy a copy of CHILD ZERO at the event, you'll get a free drink courtesy of yours truly! Virtual Event: Murder by the Book (Houston, TX) in conversation w/ Matthew Quirk Friday, May 13, 2022 8PM Eastern (7PM Central)
Read more

Riding with the King 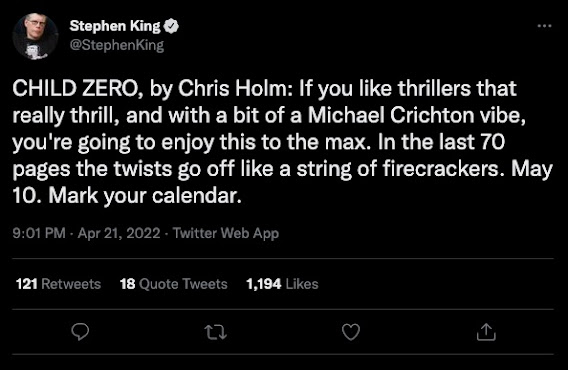 On April 26, 1991, Stephen King spoke at the Landmark Theatre in Syracuse, New York. Thirteen-year-old-me was in attendance. Mr. King was kind enough to sign my tattered mass-market copy of THE DARK HALF . It'd come out not long before, so I hadn't yet read it to pieces, as I had with all his other books. Thirty-one years later, that copy of THE DARK HALF still has pride of place in my living room. In addition to producing an unparalleled body of work, King's commitment to championing his fellow authors turned me on to writers such as Elmore Leonard , Michael McDowell , Anne Rivers Siddons , and Donald Westlake , to name but a few. When I became an author, I thrilled to see King sing the praises of talented friends such as Lou Berney , Meg Gardiner , and Scott Von Doviak . And, as someone whose first three books were paperback originals, his work with Hard Case Crime meant the world to me, because it served to shine a light on writers like me who toiled in relative obscur
Read more
More posts