Guest Blogger Stephen Blackmoore on CITY OF THE LOST

Okay, I said my piece about Stephen Blackmoore's fantastic CITY OF THE LOST (cough cough out January 3rd go buy it cough cough) the other day, but as promised, Stephen's here to give us an up-close-and-personal glimpse into the making thereof. So, without further ado, here's the man himself...

Did you know CITY OF THE LOST is a picture book?

Back in 2006 or so I caught a glimpse of CRIMINAL: COWARD, a comic written by Ed Brubaker with artwork by Sean Phillips.  Grabbed me from the first panel.  Brubaker's writing is top notch, but Phillips' artwork really sells it.  Calling it gritty doesn't do it justice.

I'm not able to keep up with comics as much as I'd like and though I've since read the rest of them it took me a while to get back there.  But those images from that first run of CRIMINAL stuck with me.

My novel, CITY OF THE LOST is a book about Joe Sunday, a two-bit thug who gets killed and brought back to life.  Things go downhill from there.

It's being called a dark urban fantasy but I still have trouble seeing it that way.  I wrote it as a noir novel with horror and fantasy in it.  It's a crime novel first and a fantasy second, not the other way around.  I liked the idea of a cover that reflected that.  Something that showed L.A.'s sunshine brand of noir, something with some rough edges and harsh lighting.  Something that caught a little bit of the bad crazy that I was going for in the novel.

When it came time to talk about cover art my editor somehow managed to read my mind and say she was thinking of getting a comic artist to do it and did I have anybody in mind.

Now Phillips has done BATMAN: GOTHAM NOIR, SLEEPER, working on a horror noir book with Ed Brubaker called FATALE, which drops January 4th, by the way.  Guy's got more things than I can name.

He has light and shadow down cold.  His latest CRIMINAL: LAST OF THE INNOCENT is a fucking masterwork.  In the geek hierarchy I'm nobody.  He's so far above me I can't even see the soles of his shoes.

So I figured, nice suggestion but there's no way in hell I'm getting Sean fucking Phillips to do my cover.

And then I got an email saying that I got Sean fucking Phillips to do my cover.

And then, because my geek heart hadn't entirely seized up, my editor said, "He's going to do some internal illustrations for the book, too."

So not only did I get the cover artist I wanted, but he was going to do some black and white illustrations.

And Jesus Christ did he knock 'em out of the park.

The thing about his work on this that I particularly liked is that he didn't see the characters exactly like I did.  Damn close, but not exact.  And I love that.  He picked up on my descriptions and depicted those characters in a way that never occurred to me.

Here's an example.  The cover.  It's a wrap-around image that I think really captures the essence of the book.  There's no scene with Joe Sunday walking around Hollywood Boulevard with a gaping chest wound in the novel.  But at the same time that's exactly what he's doing. 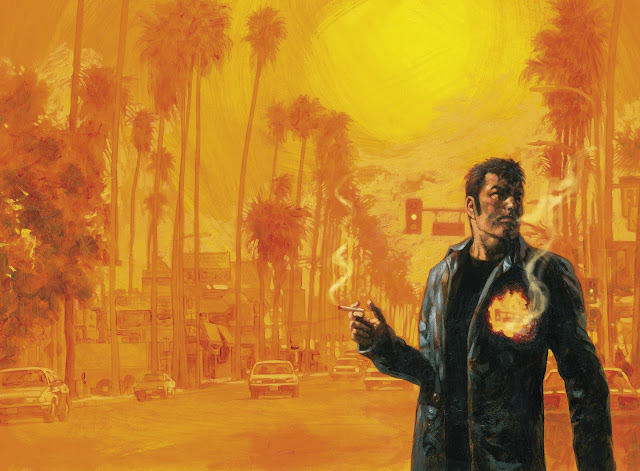 The harsh lighting, the burnt-out palm trees, the massive hole in Joe Sunday's chest you can see the traffic sign through.  That's the book right there.

Now I'm not going to show you the internal pics.  They're kind of spoilery.

But I will say this, Sean Phillips draws some mean motherfuckers and when somebody gets their head blown off in Chapter 4, well, he's got one hell of a point of view on that.

Thanks to Mr. Holm for letting me squat on his bloggy real estate.  Even if that does sound kind of gross.

With thanks to Ed Fortune:


Fans of the Harry Dresden series and those who like their modern-day fantasy with a twist of hardboiled detective story will love this (as will fans of GOOD OMENS and IN NOMINE). I firmly expect this page-turner to do well, and am pleased to hear that a sequel is already in the works.

Stephen Blackmoore's CITY OF THE LOST

That's how long you have to wait before you can read Stephen Blackmoore's CITY OF THE LOST (out January 3rd).

And believe you me, you should. Because I was lucky enough to read CITY OF THE LOST a few months back, and it kicks ass. But don't take my word for it. Peep this:


When Raymond Chandler wrote, "...down these mean streets a man must go who is not himself mean, who is neither tarnished nor afraid," the mean streets to which his mind had no doubt wandered were those of his beloved Los Angeles.  CITY OF THE LOST's Joe Sunday is mean, tarnished, and afraid, but for good reason.  The funhouse reflection of LA Blackmoore conjures is at once vibrant, seedy, and mysterious - streets so mean, they feel as though plucked straight from Chandler's DT nightmares.  CITY OF THE LOST effortlessly blends the grit with the fantastical, and paints a world in which magic is to be feared - but not nearly so much as the people behind it.

Oh, no, wait; I said that, too. But plenty of other folks have been singing Blackmoore's praises, from Wendig to Jacobs to Kirkus, who gave the guy a starred review his first time out. Not too shabby, that.

What I'm saying is, this one is no joke worth picking up (wherever books are sold, yadda yadda). The damn thing practically reads itself. It's fantastic.

"DEAD HARVEST is a triumphant debut that felt like the book I’d been waiting on for years without knowing it."

Click through the link to read the rest. And thanks to the whole Spinetingler crew, who've got me grinning from ear to ear.

If you pop over to Angry Robot's site, you'll find a little present from yours truly, in the form of free fiction. "The Final Bough" has everything a good holiday story should: dames, deceit, dentistry – and at the center of it all, an elf who wants answers even more than he wants another swig of nog.

Folks have been pretty darn enthusiastic about the pulptastic covers for DEAD HARVEST (ahem, out February 28 in the US and March 1 worldwide) and THE WRONG GOODBYE (out November 2012). So I thought, what better way than to celebrate the holiday season than to help y'all deck the halls with boughs of awesome? (Where "the halls" is "your computer" and "boughs of awesome" are high-res details of my kickass Angry Robot cover art all cropped and suitable for wallpapering. I'll admit, my analogy needs work.)