Okay, title-wise, I've got nothin'. Content-wise, though, I've got plenty. Namely this: Seven Days of Rain was accepted for publication by Demolition Magazine, to appear in their Fall 2007 issue. Demolition is fresh off of winning the 2007 Gumshoe Award for Best Crime Fiction Website, and they've clearly decided to let the place go all to shit – why else would they invite me to grace their (web)pages?

In all seriousness, I couldn't be happier. Demolition is a hell of a publication, and Seven Days of Rain is a favorite of mine; I couldn't have asked for a better fit. Best of all? It's on-line and free. So what are you waiting for? Pop over and check 'em out. And, come fall, do it all over again.

And now for something completely different.

Okay, this might have nothing to do with writing, but what it lacks in topicality (it's a word – write it down) it makes up for in sheer awesomeness.

Today, May 27, at 1:00 PM, on Portland's Eastern Prom, is the second annual Zombie Kickball game. What, you might ask, is zombie kickball? Let me see if I can explain:

Don't believe me? Check the myspace. Or the paper, who had this to say (picture theirs, italics mine): 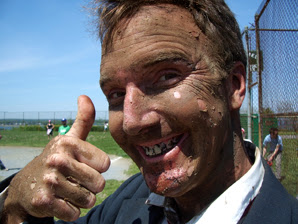 Ah, Memorial Day Weekend. Barbecues, parades and … zombies. This Saturday presents a unique opportunity to dress like a zombie and play kickball on Portland’s Eastern Prom. Organizers hope to draw 100 of the walking dead. Those who don’t want to play ball can still fill out the "Zombie Bleachers" or serve as zombie cheerleaders.

That's right – zombie cheerleaders. I live in the best town ever.

On Irons and Fire

Spring's a funny thing. The days are getting longer, but somehow, it seems I have less and less free time – hence the sudden dearth of posts. That's not to say that nothing's going on – just that I haven't had time to pop in here and write about it. So without further ado, here's the rundown, bullet-style (hey, it is a crime-fic blog, after all):
So there you have it. My life in bullets. Well, the writing bit of it, at least. So stick around. Things are getting interesting.