Showing posts from December, 2015
Show all

- December 04, 2015
Wow. The Boston Globe just posted their Best Books of 2015 list , and THE KILLING KIND is on it alongside books by such terrific authors as Steph Cha, Sue Grafton, Laura Lippman, Val McDermid, Stuart Neville, and Duane Swierczynski. That, my friends, is heady company to keep. Thanks to Daneet Steffens for including me!
Read more 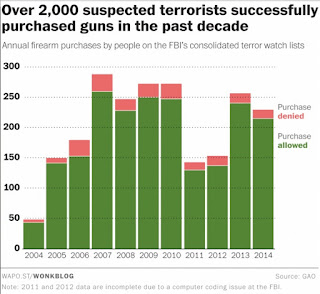 Last Friday, a deranged lunatic with a history of violence toward women shot up a Planned Parenthood clinic in Colorado Springs. As I write this, another mass shooting is unfolding in San Bernardino, this one targeting a facility dedicated to serving people with developmental disabilities. In between, according to the Washington Post , there were two other mass shootings I hadn't even heard about, which brings the total so far this year to 355. 355. That's more than one a day. And that's just mass shootings. When you factor in shootings that affect fewer than four people, accidental shootings, and suicides, the death toll is staggering. In fact, gun deaths are poised to surpass automobile deaths this year, at approximately 33,000. We—individually and as a society—have a moral obligation to do something. The NRA would have you believe that any attempts to restrict gun sales would violate our Second Amendment rights—a specious claim they must believe, because why el
Read more
More posts