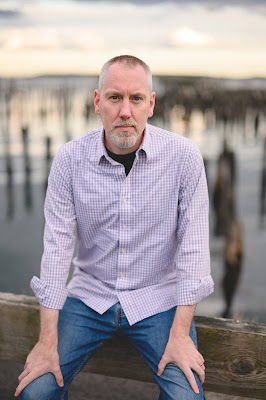 THE SHORT VERSION
Chris Holm is the author of the cross-genre Collector trilogy, the Michael Hendricks thrillers, and the standalone biological thriller CHILD ZERO. His work has been selected for THE BEST AMERICAN MYSTERY STORIES, named a New York Times Editors’ Choice, and won a number of awards, including the 2016 Anthony Award for Best Novel. He lives in Portland, Maine.
THE LONG VERSION

Chris Holm is the author of the cross-genre Collector trilogy, which recasts the battle between heaven and hell as old-fashioned crime pulp; the Michael Hendricks thrillers, which feature a hitman who only kills other hitmen; thirty-odd short stories that run the gamut from crime to horror to science fiction; and the standalone CHILD ZERO, a scientific thriller in the vein of Michael Crichton. He's also a former molecular biologist with a US patent to his name.
Chris was born in Syracuse, New York, to a mother from a cop family and a father from a long line of fantasy and sci-fi geeks. He wrote his first story at the age of six. It got him sent to the principal's office.
Since then, Chris' work has been more favorably received. His short fiction has appeared in such publications as Ellery Queen’s Mystery Magazine, Alfred Hitchcock's Mystery Magazine, and THE BEST AMERICAN MYSTERY STORIES. His Collector trilogy garnered praise from NPR and was nominated or longlisted for several awards, including a Stoker and an Anthony. His first Hendricks novel, THE KILLING KIND, was named a Publishers Marketplace Buzz Book, a New York Times Editors' Choice, a Boston Globe Best Book of 2015, and Strand Magazine’s Top Book of 2015. It won the 2016 Anthony Award for Best Novel and was also nominated for a Barry, a Lefty, and a Macavity. His second Hendricks novel, RED RIGHT HAND, was named a Boston Globe Best Book of 2016 and nominated for the 2017 Anthony Award for Best Novel.

Chris and his wife, writer/editor/reviewer Katrina Niidas Holm, live in Portland, Maine. No, she hasn't reviewed his books.