CM: Cut It Out

The question of the week at Criminal Minds reads as follows:


"How often do your personal interests (hobbies, sports, restaurant preferences) find their way into your books as your characters’ interests?"

My answer? As little as possible. Click through to find out why.

This week at Criminal Minds, we're talking writing superstitions. Well, the others are, at least. Me? I'm using my post to break free of my only one. Check it out here.

Today, at Crimespree's blog, I talk about the real star of my fiction-writing show (in her own mind, at least): my cat Binkley. The piece is my contribution to the twin traditions of cats in crime fic and on the interwebs. Also, awww. (What? Raymond Chandler freakin' adored his cat. Look it up.)

Looking at my calendar, I realize today marks one year exactly since my launch party for DEAD HARVEST. And my, what a year it's been. These past twelve months have been so action-packed, in fact, it seems like a lifetime's passed, which is why I'm psyched (and a teeny tiny bit surprised) to see folks are still finding their way to my humble little series debut.

The latest review for DEAD HARVEST comes courtesy of writer/reviewer/bookseller Josh Cook, who, at his blog In Order of Importance, declares the book "Like the good Die Hard. With demons." (Welcome to the party, pal!)

And in other DEAD HARVEST news, author Erik Arneson declares it one of his Favorite Five Books of 2012. High praise, indeed, when one considers the caliber of the other four.

So thanks to Josh and Erik both, and thanks to all of y'all for making this past year one to remember. Fingers crossed there's plenty more kickassery ahead. 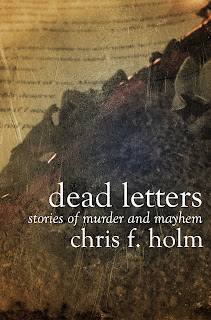 For a limited time, my Kindle collection DEAD LETTERS (which features my Anthony-eligible short "The Putdown") is available for just $0.99!

To hell with secret ballots...

Well, fellow B'con attendees, the time is upon us to make our nominations for this year's Anthony ballot. And while I can't speak to whether anything I've penned is deserving, I can at least tell you what I've written that's eligible, and for what category.

But it's a whole big world out there, folks, and I'm far from the only game in town. Those of you with ballots are allowed to nominate up to five works each in a variety of categories, provided those works came out in 2012. And since it's tough to keep track of what books/stories/whatever are eligible for a given category, I'm throwing open the comments section for fans and writers to put their recommendations (and/or their own stuff) out there. Just be sure to include the category for which the work is eligible. The complete list of categories is as follows:

So have at it! Toss out some suggestions!