Yeah, yeah. Been remiss on the blogging of late. But the writing life's been insane lately, leaving little time for chatting at you people. Fear not, though, 'cause I've got a couple kickass suggestions for how to while away your time without me. 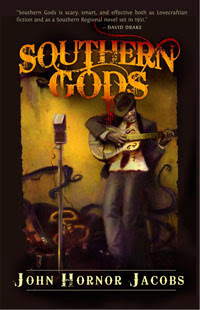 Like Lovecraft mythos? Southern Gothic? PI novels? The blues? Damn right, you do. That there list is a lightsaber away from mashing gleefully on every damn geek button I've got. And it also just so happens to be the basis for John Hornor Jacobs' stunning debut SOUTHERN GODS. And if you think the ingredients sound tasty, wait till you find out just how spicy things get once John lets it all simmer. This is one book you don't want to miss. 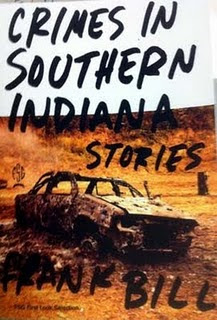 That is, until Frank Bill.

This dude's got the goods. The stories in CRIMES IN SOUTHERN INDIANA pack a punch. Like a vicious, unexpected, holy-shit-was-that-a-roll-of-quarters-in-your-fist kind of punch. Pick this collection up now, so you'll know what the hell folks are raving about come award season.

So there you have it. Get clicking, and get reading. But don't stray too far. I just may have a cover to show off soon...

Cats and kittens, grab your hats and mittens, 'cause do I have some cool news for you. (Ugh; who says that? No matter, Chris: just keep calm and carry on.) As of right this second, PULP INK is live and ready for download.

What is PULP INK, you ask? (You don't? Well, just be a sport and play along, then, would you? Because obviously, I intend to tell you either way.) PULP INK is an ebook anthology, cooked up by Nigel Bird and Chris Rhatigan and released by the good folks at Needle, in which some of today's hottest crime fic writers take turns riffing on tracks from the iconic Pulp Fiction soundtrack. Writers like Allan Guthrie. Matthew Funk. Patti Abbott. Hilary Davidson. And, um, me.

My entry's called "A Night at the Royale." It's bloody, pulpy, and as referential as all get-out. (Seriously, I even crammed a nod to Tarantino's portion of Four Rooms in there, so you know I'm eight kinds of Tarantino-geek.)

You can download PULP INK for Kindle, Kindle UK, and via Smashwords. So what're you waiting for? Don't make me summon the gimp.

Confession: I've never been to a writing convention. Not sure why. Distance, for one, seeing as how I live way the heck up in Maine – a lovely place to spend one's time, but not exactly central to anything. Also, there's the whole what-do-I-do-when-I-get-there question. Okay, there are these panel things, and dinners, and a whole bunch of drinking, but for years, I didn't know many of the attendees, so I kind of expected I'd wind up having a quiet cocktail at the end of the bar with my lovely wife while wondering why we hadn't simply elected to do so in our living room.

Then Twitter happened, and suddenly, I knew all kinds of writerly folks. And to a one, the con they most talked about was Bouchercon. So, said lovely wife and I decided to hell with it – we'd go. Mostly, we figured, we'd just lay low; you know, watch our friends' panels, have some drinks, grab some books. It sounded like a decent enough plan.

Then I got a book deal and an Anthony nomination, and that plan went out the window.

In lieu of lying low, the fabulous Judy Bobalik, Jon Jordan, and Ruth Jordan have seen fit to put me on a couple panels.

Yeah, I said a couple.

The first of them, titled BAD SEED: SEX, VIOLENCE, AND EVERYTHING THAT MAKES A BOOK GREAT, is scheduled for Thursday night at 9:00 PM. Moderated by Scott Montgomery, this panel features such ass-kicking name-takers as Christa Faust, Craig Johnson, Scott Phillips, John Rector, Benjamin Whitmer, Jonathan Woods – and, um, me. Oh, and I hear tell there will be a bar.

The second panel, which I'll be moderating, is titled DARK ANGEL: MORALLY CHALLENGED HEROES, a topic close to my heart. It's set for 2:30 PM Friday, and damn did I luck out with panelists: slated to participate are Bill Cameron, Blake Crouch, Leighton Gage, Theresa Schwegel, and Michael Wiley.

Oh, and as a super-duper added bonus, the missus (aka ace mystery reviewer Katrina Niidas Holm) is moderating a panel called DEATH BY GOOD INTENTION, which features such luminaries of the cozy mystery scene as Donna Andrews, Shirley Damsgaard, Rosemary Harris, Julie Hyzy, and Joanna Slan. You can catch that one at 11:30 AM Friday.

So there you have it. In one fell swoop, I went from no cons and no appearances to one con and two appearances. Three, if you count me cheering from the back (or, more likely, right in front) while Kat does her thing. So stop by. Say hi. Feel free to heckle (me, not Kat). I should be easy to spot; I'll be the one surreptitiously snapping cell phone pictures of my fellow panelists whilst simultaneously trying my damnedest not to vomit. ('Cause dude. Big crowds. Big nerves. I'd best get interesting quick.)