In which the author is a persnickety old coot...

peaked (adj.)
1. having a peak.
2. pale or drawn appearance suggesting illness or stress.

Usage: A peek in the mirror indicates this fit of pique has left me looking peaked, so vexed was I at having once each today come across the phrases "peaked my interest" and "peeked my interest", when in fact the proper word choice would be "piqued".

Also, GET OFF MY LAWN.

Thank you. That is all.

I'm delighted to report that David Dvorkin is now represented by Brendan Deneen of FinePrint Literary Management. Pop on over to his blog and give the man some much-deserved props! 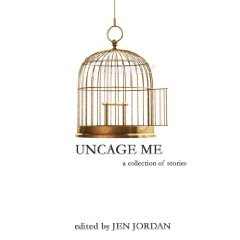 With all Katrina's recent medical craziness, I almost forgot to post about the long-anticipated release of Uncage Me, an anthology of transgressive crime shorts from a lineup that reads like a who's who in the world of crime fiction. Faust, Gischler, Bagley, Guthrie, Blackmoore, and a whole bunch more, plus a foreword by John Connolly that's worth the sticker price all on its own. So if you've got the stomach for some of the most brutal stories the crime world has to offer, go buy yourself a copy or three. I know I'm gonna.

Where were you when we landed on the moon?

You know what? It doesn't matter. Unless your name's Neil Armstrong, David Dvorkin's answer is no doubt cooler.

I wish that title were a clever segue into talking about tweaking a character's back-story or some such, but unfortunately, this post is actually about back surgery. Specifically, Katrina's.

As some of you already know, for a little over a month Katrina has been suffering severe pain, as well as numbness and muscle weakness, radiating down her left side. About ten days ago, an MRI confirmed that she had a massively herniated disk -- one bad enough to warrant a consult with a spinal surgeon on Tuesday, followed by a diskectomy on Friday. As of right now, she's resting (somewhat uncomfortably) on the couch, but the fact that she is home at all right now is a relief. Thanks to the severity of her injury, the next two weeks are going to be a bit rocky, but overall, her prognosis is quite good.

Truthfully, I wasn't sure I'd mention it here, because I like to keep my writing life and personal life separate, and I'm wary of cheapening these sorts of things by treating them as blogfodder. And I rejected outright the idea of posting about it before her surgery took place. Downplaying her condition beforehand would have risked tempting fate; waxing melodramatic about it would would have been tacky and exploitive. But I'm writing about it now because it's been dominating my brain-space for quite a while now, and if I'm scarce in commenting on friends' blogs for the next several days, it's because my time online is limited until I can get her back on her feet.

While I'm posting, I'd like to give a huge shout-out to Dr. Binette of Orthopedic Associates, and the rest of his surgical team as well. They came through in a big way for the both of us, and I'm very grateful for the level of care they provided. Thanks to them, Katrina will be right as rain in a matter of weeks. Without their help, it would have been years, if ever, before she got back to normal functionality.

Oh, and a brief language-nerd PS: I used to hate the word "exploitive". For the longest time, "exploitative" was the more common form of the adjective for "exploit", and only in recent years has the admittedly odd-looking "exploitive" begun to make up ground. So why my conversion? Simple: "exploitive" is shorter, without sacrificing one iota of clarity. It's often said that in writing, clarity is god, and I agree. But I'd put brevity at a close second (demigod, maybe?). So "exploitive" it is.

Then again, I just used up a hundred or so words explaining why a couple fewer letters was the way to go, so what do I know?

Tonight, at 8:15PM, John Connolly will be signing books at Children's Book Cellar (52 Main Street) in Waterville, Maine. I can't make it, but Bagley's gonna be there holding down the fort, which for my money makes two ridiculously talented crime writers under one roof. Be sure to check it out. You can read the details here.

Today has been kind of a shit day. As in a "in all my years as a doctor, that's the most impressively herniated disc I've ever seen" kind of day. (Not my disc, mind you, but Kat's. If it was my back that was all messed up, I'd be on the living room floor, demanding IV narcotics and crying like a tiny litte girl. Katrina went back to work, and followed that up with a little grocery shopping. Then she tried to carry the goddamn bags. And she actually is a tiny little girl. Maybe people should start saying "I cried like a scrawny, goateed crime writer." But I digress.) But you know what makes a shit day better? Money.

More specifically, money for writing. See, the mail today (which Katrina went and fetched; there's just no freakin' stopping her) contained a check from Dell Magazines -- payment for my short story Action, which will appear in Alfred Hitchcock's Mystery Magazine sometime in the not-too-distant future. It probably ain't enough to cover the copay for the MRI, but it doesn't matter. It may sound crass, but there's no better feeling for a writer than getting paid actual dollars American for something you made up.

So yeah. Happy-dancing abounds. Now if you'll excuse me, I need to go prevent my wife from making dinner.

This morning, I read a post over at Kameron Hurley's blog that really resonated with me. In it, she talks about her flagging confidence in her writing, and comes to a conclusion that sort of rocked me back. Here's an excerpt (italics mine):

I worry these days that my writing isn’t as good as it used to be, because all the choices I make seem to be poor ones. I’ll go through a story or a scene and realize that what I chose during the first pass was totally inappropriate. I keep thinking I’ve lost touch with the words, that there’s some kind of innate feeling for plot, character, structure, that went by the wayside. It’s made the last year of writing incredibly slow-going and difficult.

It wasn’t until tonight, as I went through and worked on the heroes story, that I realized what I was doing. There wasn’t anything different about the choices I made the first time through now than there was three years ago. The difference is, they’re *transparently wrong choices* now. As I go through and clean up the words, I’m seeing the errors – and where those errors will lead – a lot sooner than I would have a couple years ago.

Her conclusion really resonated with me because I've been struggling with precisely the same thing. I've found that I've completely lost the ability to plow merrily through my manuscript, tossing words about willy-nilly with nary a care as to where they land. Instead, each and every word, phrase, character, and plot element in a scene is carefully placed, nudged, tweaked, turned, and then angrily toppled like a child's stack of blocks, only to start from scratch again until the scene is right. The result is a first draft far cleaner than any I've written, but written at a far slower pace than I'm used to. I suspect, in the end, this book won't take any longer than the last two (in fact, it may wind up finished quicker), but much like being stuck in traffic instead of cruising on the open road, it sure feels like it's taking longer.

For the longest time, I've just assumed my issue was one of shaken confidence. Shopping two books that represent several years of effort and brain-space is an arduous task, and no amount of truly wonderful feedback can do much to lessen the strain the process puts on you. The whole process is nerve-jangling and nausea-inducing, if only for the fact that I've put myself out there, and I'm really freakin' invested in the outcome.

But Kameron's post managed to reframe my current manuscript-angst. I've come to realize the book I'm working on now may be the best I've written yet. The only catch is, it is that way because I've learned a thing or two in the course of writing my last two books, and that knowledge comes not without a price. Rather than sailing obliviously on through my first draft, only to panic while working on the second, I'm meeting those problems head-on early in the process. Which, frankly, kinda sucks.

So yeah. I'm not entirely sure what to do with this little borrowed revelation o'mine, except to put my head down and soldier on. But I take heart in the thought that this weird crisis of confidence might simply be a rite of passage. As Sam Beam'll tell you, "There's no way to grow that don't hurt." Long as you realize that, the hurt don't seem so bad.

Congrats, Stuart! It's official. According to Amazon UK, my copy's in the mail.

Oh, and for those of you who'd like to get your hands on a copy, I'd start here. By all accounts, you'll be glad you did.