I just received word that Seven Days of Rain has been shortlisted for a Spinetingler Award in the category of Best Short Story on the Web, and I seriously couldn't be more excited. I'm nominated in the same damn category as Charles Freakin' Ardai (that's what it says on his birth-certificate, I swear!), so I fully expect to get my ass handed to me, but as they always say, it's a thrill just to be nominated.

Funny – I always suspected people were totally full of shit when they said that. Turns out, not so much! Thanks to all who nominated me. Looks like I owe some folks a beer.

So what now, you ask? Well, I'll tell you (or, rather, I'll let the ever-charming Sandra Ruttan tell you; italics mine):

Voting is open. ONE E-MAIL PER PERSON ONLY. You cannot send another vote in, even for a different category – multiple votes from the same sender will not be counted. Take the time to consider your votes carefully. E-mails must be received by December 30, 2007 - authors, if you're putting this in your newsletter make sure you are clear about the deadline for voting. Many recommendations were not considered in the first round because they were sent late.You may vote for one winner in each category as long as all votes are submitted in one e-mail. Simply state the category and your chosen winner for each of the eight categories. Any votes that contain more than one selection per category may be removed from consideration completely. No ties.Send your e-mail to sandra.ruttan@spinetinglermag.com with AWARD NOMINATIONS in the subject line. It is not necessary to explain the reason for your vote.Popular vote will be counterbalanced against editorial opinion at this stage, except for the short story category. In order to ensure fairness the short story category will be determined strictly by popular vote. While I also appreciate the people who nominated me for special services, I removed myself from consideration for that category as well as from the New Voice category. Winners will be announced in early 2008.

For additional information, as well as the complete list of nominees, check out Sandra's post on the Crime Zine Report. Oh, and if you dig the story, drop her an e-mail, and maybe send a vote my way! 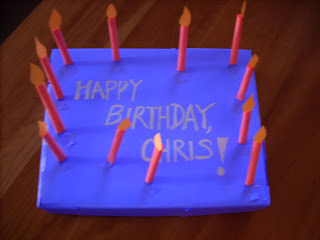 Now, I know what you're probably thinking: as holidays go, Thanksgiving ain't so much about the loot. To that, I say, it's your bad planning, not having a birthday that coincides with the tastiest holiday o' the year.

But I'm not here to taunt you with tales of my Dedicated Pumpkin Pie (made, spectacularly as always, by my culinary genius of a wife, who is also insightful enough to recognize the great injustice that is watching this, my favorite of pies, being devoured by scads of undeserving non-birthday-having pretenders-to-the-holiday while I look on helplessly) or of my tasty, tasty cheesecake (the box pictured above, which was again crafted by said uberwife, who then stocked it with scores of delicious and unpronounceable cheeses from our local fromage-monger). Nor am I going to mention the snazzy clothes, bevy of music, or stack of DVDs I've been the happy recipient of on this tastiest of birthdays. This is, after all a writer's blog, and mentioning any of that here would be no more than gloating, really. No, instead, I thought I'd talk about the books.

It was a light year, this year, book-wise (see assorted sundry other presents above), but what it lacks in quantity, it more than makes up for in quality. All three books are ones I've been dying to read, and they span several genres, which guarantees a book for any mood. Said book-loot is as follows:

Songs of Innocence, by Richard Aleas
Anyone who doesn't think Charles Ardai's pseudonymous debut Little Girl Lost was one of the best PI tales in recent years is, quite frankly, off their nut. (Off his/her nut? Man, we need us a gender-nonspecific singular; that just sounds awkward as hell.) This, his follow-up, promises to be every bit as good. I'll be shocked if I don't devour it in a sitting.

Four and Twenty Blackbirds, by Cherie Priest
A while back, Jennifer Jackson, Agent Extraordinaire, posted a link to this post on Cherie Priest's blog, and I've been reading ever since. This, her debut, sounds like a fantastic tale of gothic horror, and I've been dying to get my hands on it. Right now, I'm reading Michael McDowell's Blackwater (one of Katrina's faves), so I'm primed for some more kick-ass Southern gothic. Also worth noting is the cover's freakin' beautiful.

The Golden Compass, by Philip Pullman
Okay, all right, I'm a bad book-geek. I admit I want to read it 'cause the movie trailer kicks wheelbarrows full of ass. Sue me.

So there you have it. I may be a year older, but I ain't complaining. After all, I've got loads of stuff to read...

Ah, the holidays – that magical time of year when submissions go unread, and the great, multi-headed beast that is the publishing industry gets sleepy from turkey consumption and moves with all the speed of congealed gravy...

Sorry. That one got away from me a bit. Anyway, where was I?

Right. The holidays. It seems for most of the publishing world, the holidays are a time to close up shop and catch up on the heaps of work that have piled up in the preceding months. For me, though, the holidays are all about vast swaths of time in which the Day Job doth not interfere, which means I get to wake up in the morning, make myself a cup of tea, and clack away at the keyboard for hours unimpeded. They say most folks prefer having written to writing, and believe me, having written doesn't suck, but writing (when it's working) is about the best damn thing there is. Okay, top five at least.

Now, I'm not the speediest writer in the world (Nora Roberts, for example, has written and sold three novels in the time it's taken me to type this sentence), so I can use all the extra time I can get. Especially since I'm trying something a little different with the Next Book: namely, not outlining. With The Angels' Share, both the demands of the plot and the fact that I'd never written a novel-length work before made outlining a natural choice, and it doubtless had its benefits. I think the plot is fairly tight, and I was able to plan the rhythm of the book in a way not possible when writing off the cuff. The flip-side of that, though, is that some of my favorite passages in that book were total surprises to me when I was writing them, and when working with an outline, the surprises are few and far-between.

For the Next Book, I wanted to try something a little looser, and maybe see if I could keep the surprises coming. Don't get me wrong, I've got some idea of the major beats of the story, and I know more or less how I expect it to end, but there's something about committing an outline to paper that seems to solidify the events in my mind. Writing off the cuff has certainly kept the book fresher for me thus far, and I figure if I don't know exactly how the story's going to unfold, it's a safe bet the reader won't either. And there's another benefit as well: I find I don't hold back as much. Rather than saving a big moment of suspense for later in the book, I try to write the biggest, baddest scene I can, and worry about topping it later. Of course, that strategy might bite me in the ass later, but thus far, it's been going okay. And it's nice to see that as I'm nearing the halfway-mark, there are still moments of discovery to be had.

The pain about not outlining is that you're forced to make a lot more decisions on the fly. That means breaking to research something as you write, which can slow the process considerably. Also, there's a chance I'm deluding myself on the whole not-outlining-as-strategy thing – I think all writers are sort of junkies for those moments where their characters surprise them, and I certainly get loads more surprises when I'm flying without a net. But I'm really liking the book so far, and I've got to believe that'll translate to the page.

Now if you'll excuse me, I've got some writing to get back to.

Looking for something good to read?

Yeah, whatever, I suck. Between the Next Book and some (wholly unexpected) outlining of a sequel to The Angels' Share, I've been not so much with the blogginess these days. That's right: blogginess. It's a word – write it down.

Anyway, in lieu of any content of my own, here's a little something to keep you busy:

In the Ditch by Patrick Shawn Bagley

Nothing like a little murder, mayhem, and fiddleheads to keep you warm in this chill descent into winter. Enjoy.