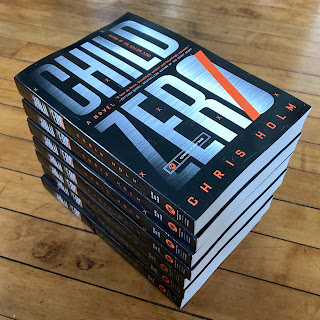 Though CHILD ZERO's release date is still five months away, advance reading copies have begun making their way into the world. I'm elated comma terrified.
Don't get me wrong; I think the book is good. I worked hard to make it so, and early feedback has been overwhelmingly positive. But, after five years of obsessing over every plot point and punctuation mark, I'm finding it a challenge to cede control—particularly knowing that the version many peers, reviewers, and book bloggers are going to see is not final.
For the uninitiated, ARCs are typically printed from uncorrected proofs, meaning the text has been copyedited, but not yet reread—and, having since reviewed my proof pages, I know CHILD ZERO's ARCs contain errors.
Intellectually speaking, I'm aware all books contain errors, and CHILD ZERO's are relatively minor. Hell, of the twenty items I flagged for correction, at least seven aren't technically errors, so much as clumsy writing—and another six were the result of an automated attempt, post-copyedit, to remove duplicated words (e.g. "nine one one" becoming "nine one").
Emotionally, however, it feels like each of them reveals me as a fraud. So, what's a neurotic writer to do?
Write, that's what. Explain myself, as best I can, and maybe exorcise my demons in the process. Making hay of my neuroses is my whole dang job, which is handy, because it means I've got no shortage of fuel.
Publishing a novel is an act of letting go. What once existed only in one's mind is released into the wild, where—at best—it will be loved and hated, critiqued and defended, embraced and abandoned.
Is CHILD ZERO ready? Am I?
Beats me. Guess we'll find out soon enough.