On Gender and Jedi

- December 16, 2017
Fair warning: beyond here be spoilers (not to mention deep-dive Star Wars nerdery). If you haven't seen The Last Jedi yet, you may want to navigate away.

I'm serious. If you keep reading, you will be spoiled.

This is your final warning. From here on out, it's all spoilers, all the time.

Still with me? Cool. The Last Jedi is chock full of big ideas and stylistic risks, but there's one subplot in particular I can't stop thinking about: namely, Poe Dameron's attempt to undermine Admiral Holdo's command and thereby save the Resistance fleet.

The storyline is not without its controversy. Even those who love the flick largely agree that the Canto Bight sequence (a direct result of Dameron's mutiny) was a misstep that sapped the movie's momentum and did nothing to forward the plot. Hell, when I walked out of the theater, I was half-convinced of that, myself. But the more I thought about it (and discussed it with my wife), the more I came to realize that's not the case. Dameron's insurrection did impact the story in dramatic, and necessary, ways—by making things immeasurably worse for the Resistance.

I'm geek enough to've lurked in many a spoiler-thread since I saw the movie Thursday night, and a common knock against that storyline is this: if Admiral Holdo had simply informed Poe Dameron of her plan, a lot of bloodshed and heartache could've been avoided. 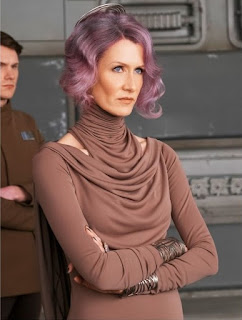 Put another way: if this woman—who is, by Dameron's own admission, a decorated military leader—had taken the time to explain herself to a hotheaded male subordinate, none of this would've happened.

That, to me, is the definition of a bad take—and, in my opinion, precisely the opposite of Johnson's intent. I don't think it's accidental that Admiral Holdo presents as elegant and feminine. I think Johnson designed her to be discounted by the likes of Dameron and, quite possibly, the audience.

If Admiral Ackbar (God rest his squishy soul), rather than Holdo, were in charge, would Dameron have dared question him? Would fans be clamoring for Ackbar to've taken the time to fill (the recently demoted) Dameron in?

It's not a stretch to say that Johnson was trying to make a point about the difference between derring-do and true heroics, since Leia says as much to Dameron (after she wakes from her coma and, her blaster on stun, shoots him, thus ending his mutiny). However, I think he's also making a point about the way women are silenced, ignored, and dismissed, and the outsized value we place on male-coded versions of bravery. It's a theme that echoes throughout the movie: in Rose's sister's sacrifice; in Holdo's; in Rey's revulsion at discovering Luke's role in the emergence of Kylo Ren; in Rose thwarting Finn's suicide mission. The message is timely, and also—given that it's being delivered via a series that has historically been imbalanced with regard to gender representation—deeply subversive.

I'm not saying The Last Jedi was a perfect movie. I still think the Canto Bight sequence was overlong and underbaked. But it wasn't there by accident, and nor was the inversion of expectation with regard to Dameron's attempted heroics. Love him or hate him, Johnson pushed the series forward in daring, unexpected ways, many of them slyly philosophical.

If you ask me, it's about time. And speaking of about time, seems to me we oughta see a woman in the director's chair very soon...