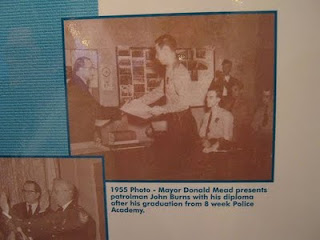 Photo courtesy Stephanie MacDerment
The other day, I was poking around my cousin Steph's blog, and came across the picture above. She'd taken it at the Syracuse PD tent at the New York State Fair. Seeing it rocked me back, because the scrawny young man receiving his Police Academy diploma is my grandfather.
My grandfather (Papa, to us grandkids, because nobody, but nobody, called him Grandpa) was a great many things. A decent man. A stern disciplinarian. A fierce competitor. A consummate storyteller.
But most of all, my Papa was a cop.
A damn good one, by all accounts. Papa rose through the ranks of the Syracuse PD from beat cop all the way to Deputy Chief, and despite everything he'd seen along the way, the man still never locked his doors at night. "If they want to get in, they'll get in," he'd say. "No point having them break a window to do it."
I remember clear as day the joy of riding with him in his Caddy (he always said when he made it, he was gonna get a Cadillac, and even though that piece of junk wound up going through engines like it went through gas, he loved it just the same) on his weekend rounds, my feet not even touching the floor mats. To the newsstand, for a Batman comic (mine) and a Sunday paper (his). To the bakery, where we'd pick up doughnuts for the family to nosh on after Sunday dinner (that's right—the man was thin as a rail, but I'll be damned if he didn't love his doughnuts). And to the Public Safety Building, where every cop in the place would stop and say hello like I was some kind of VIP. (Yeah, okay, my cousin Joey was usually there too, but if he wants to tell his side, he can get his own damn blog.)
I remember, a few years later, me and Joey heading to the basement of the PSB with one of Papa's friends—for what, exactly, we didn't know, because all Papa'd say was that it was a surprise. See, like most young boys, we'd developed a fascination with firearms, in that harmless, cops-and-robbers kind of way. Common enough, I know (even if my liberal leanings may retroactively make that sound a little scandalous). What's less common is getting to go to the official police firing range with a member of the SWAT team to learn to shoot one (or five or six, as was the case that day.) But that was Papa. Tough as he could be, the man was a marshmallow when it came to his grandchildren.
I remember Papa whisking me, Joey, Steph, and Sarah to Friendly's for ice cream ("For God's sake, don't tell your grandmother.") The post-Sunday-dinner candy lottery, where the names of all the grandkids (and mine is a Catholic family, mind, so there's a lot of freakin' grandkids) are put into a hat, and the order in which they're drawn dictates when you get to pick from the candy bowl (winner=Caramello; loser=Necco Wafers.) Waiting for Papa to get up off his spot on the couch, so that we kids could pile on, giggling, and wait for him to come back and remove us.
I've got a thousand stories like that about my grandfather, sweet remembrances of kindnesses big and small, but there is nothing he passed on to me that I treasure more than my love of books. The man went through mysteries like he went through cigarettes (he could kill a smoke in three good drags), and when he finished them (the books, that is), he passed them on for the rest of the family to read. They'd circulate from house to house like holy relics, each read leaving them more dog-eared and broken-spined than the last, until, finally, they found their way to me.
I couldn't have been more than ten when I traded up from my Holmes and Christie and Hardy Boys to Papa's MacDonald, Sanders, Wambaugh, and McBain, and believe you me, it was a revelation. Their books were filled with men who smoked and cussed and fought and loved and never failed to crack a joke, men who lived in the darkness and the muck, but who were never of it. Men that, to my young mind, looked an awful lot like Papa.
It's taken me a long time to realize just why the archetypes of crime fiction are so resonant for me. Papa died ten years ago this summer, cancer withering in mere months a man that I had thought was cut from stone. But looking back, I'd say the origin of my passion for writing crime is pretty clear.
I suspect my mom is crying pretty hard now, so it's time to wrap this post up. And since no words of mine could do so eloquently enough, I leave you with this quote from Raymond Chandler, taken from his landmark essay, "The Simple Art of Murder." I don't know if Papa ever read any Chandler, but I have a feeling he'da liked him if he did:
"[D]own these mean streets a man must go who is not himself mean, who is neither tarnished nor afraid. The detective in this kind of story must be such a man. He is the hero, he is everything. He must be a complete man and a common man and yet an unusual man. He must be, to use a rather weathered phrase, a man of honor, by instinct, by inevitability, without thought of it, and certainly without saying it. He must be the best man in his world and a good enough man for any world. [...] If there were enough like him, I think the world would be a very safe place to live in, and yet not too dull to be worth living in."