"The World Behind" Now Available! 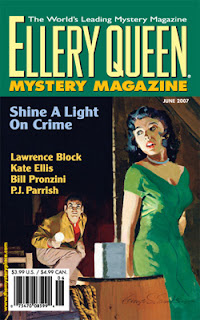 Well, sort of, at least. I got word from a good friend and EQMM subscriber that the June 2007 issue arrived in her mailbox yesterday. She further assured me that my acceptance was not, in fact, some sort of elaborate prank, as The World Behind was really, actually, um, in it. So good on me, then.

Also, word on the street (and by "on the street" I mean "from my mom, who harassed every bookseller and/or purveyor of magazines in upstate New York to track down a copy or ten") is that the issue will hit newsstands the second week of April. That's next week, for the calendar-challenged. So head on out and pick up a copy. Though I've yet to see it, I'm certain it's chock-full of mysterious goodness. After all, it features stories by such impressive folks as P.J. Parrish, Kate Ellis, and James Lincoln Warren (not to mention yours truly). Oh, and some guy named Larry, who I think really might have a future in this business...